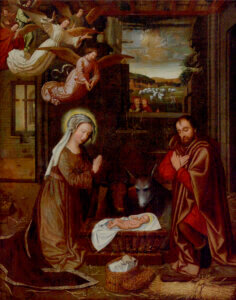 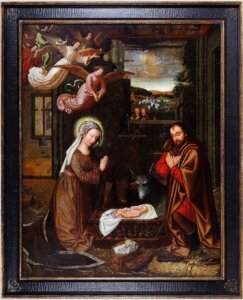 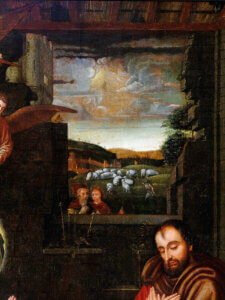 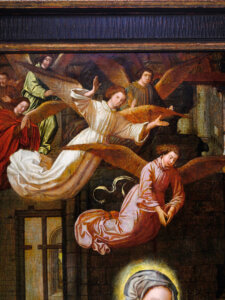 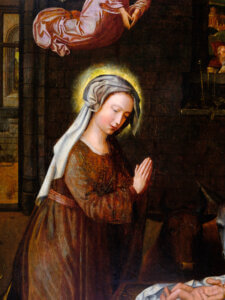 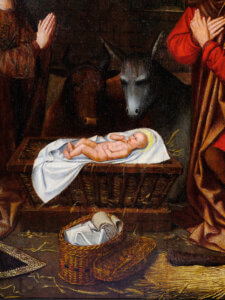 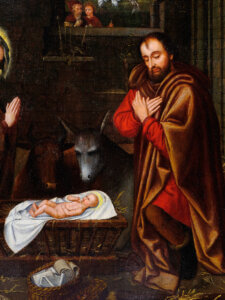 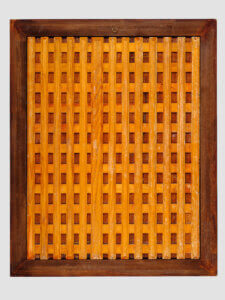 Ambrosius Benson was active in Bruges between 1518 and 1550, painting in the style of the Flemish masters of Old Netherlandish painting. He usually did not sign his works, as in this case, however, it can be safely assigned to his oeuvre by typical characteristics. The religious work was either commissioned by the church or, in this case due to its size, painted as a private devotional painting. Its composition and individual elements are very similar to those of the Christmas painting exhibited in the State Hermitage in St. Petersburg.

The Holy Family, consisting of Mary, Joseph and the Child Jesus, occupies two-thirds of the picture’s surface and is constructed pyramidally: Mary and Joseph kneel in a devotional posture, flanking the child. It lies on a cloth in a manger filled with straw, which is also shown as a bundle in the foreground. Ox and donkey behind the child complete the group and locate the representation in a stable. The walls, made of stone blocks, as well as the wooden ceiling, look rather fragile and ruinous; vegetation has also made its way through the stone bricks. In the background, a large window gives a view of a hilly landscape populated by sheep. Atmospheric plays of light in the opening in the sky between the clouds direct the viewer’s gaze into the distance, while the earthly city walls suggest that the figures are staged in nature outside an urban environment. A younger and an older shepherd stand behind the window and look at the action, mirroring the viewer. Behind it, in white outlines, there could even be an angel who is announcing the good news that the Messiah has been born. Particularly exciting is also the group of six angels flying down from the upper left corner – from heavenly spheres – expressing their homage in various gestures through folded or raised hands. The gazes of all the figures shown are directed at the little child in the manger, with the relationship of gaze between mother and child being particularly emphasized, not least by the suggested halo of Mary and Jesus. A particularly impressive example of comparison is the painting of the same subject in the Hermitage: not only the arrangement of the Holy Family is identical, but also the position and gestures of the descending host of angels and the child. The view of a hilly landscape in the right half of the picture is also similar; however, here four shepherds step closer to the action; the central family now occupies only half of the scene, which this time is set in a more populated city and ancient ruined landscape. This most likely depends on different patrons: due to the wealth of the commercial metropolises, such as the Flemish city of Bruges, where the artist worked, the rich patricians now also acted as important patrons and patrons. The stage-like scene of a ruinous temple landscape in the Hermitage goes back to the concept of the rudimentary primitive hut (man’s first dwelling), which was readily replaced by ruins from the late 15th century. However, in the case of the presented painting, the painter wanted to create an atmosphere in which poverty and simplicity are better displayed, which also emphasizes the intimate togetherness and piety, especially in conjunction with the high degree of naturalism. The transition from the late Gothic to the Renaissance is particularly well staged here: symbolic colors of the medieval manner, such as the bright red of Joseph’s robe, could allude to the future Passion of Christ. The rich drapery and elongated proportions of the figures also refer to the late Gothic tradition. Here, special reference should be made to the comparison with Benson’s painting “Resting on the Flight to Egypt” in the Groenigemuseum, since here both the bright red coloring of the coat and the physiognomy of the child are identical. Furthermore, in the painting described, Mary is seen wearing an embroidered dress and a cloak richly decorated with brocade borders, which indicate her future position as Queen of Heaven. The same brocade-lined coat in ornate drapery can be seen on the birth scene in the Yale University Art Gallery. Here both the arrangement the Holy Family, the position of the child and the white cloth draped underneath are the same. What is particularly impressive in the presented picture, however, is the new, precise observation of nature, for example, the plants sprouting from the walls or the individual stalks that have detached themselves from the bale of straw. A detailed fabric surface characterization and plasticity is especially shown in the woven basket, which is present here (and also in the mentioned comparative examples) and filled with wrapping cloths. This is probably a particularly characteristic feature of the scenes of Jesus’ birth executed by Benson. This universal formal language of Old Netherlandish painting was taken up and varied by Benson again and again in the course of his artistic activity in order to express a deep religiosity, which, although still using late Gothic symbolic features, is already rooted in the naturalistic tradition of the Renaissance.