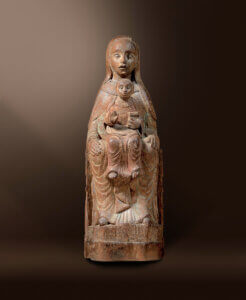 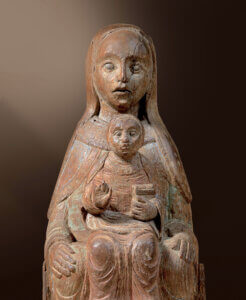 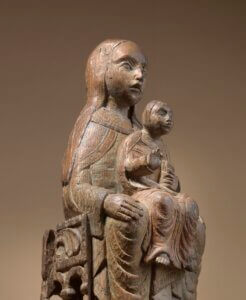 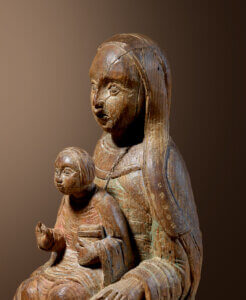 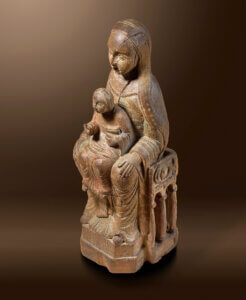 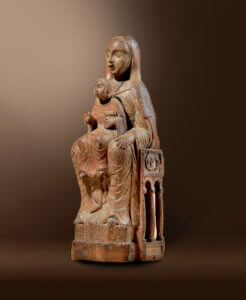 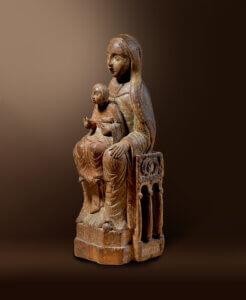 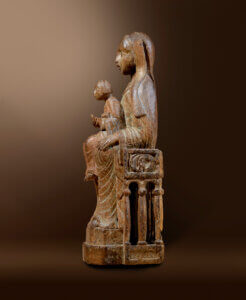 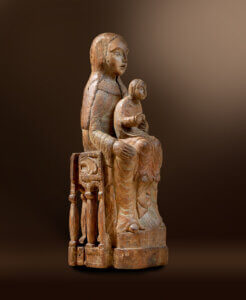 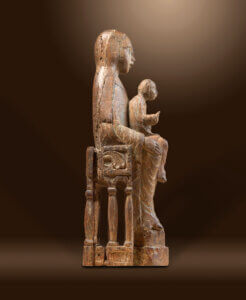 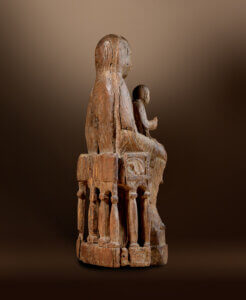 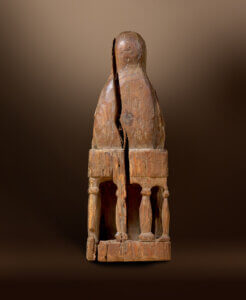 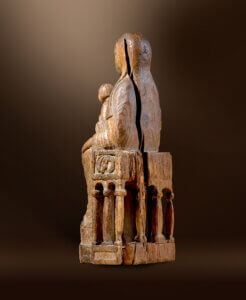 This depiction of the Madonna is a masterfully carved, extremely early figure made of pine or stone pine wood in an exquisite state of preservation. It was made in the French Auvergne around 1175. The compact size (approx. 35 cm) as well as the high quality indicate its production for the precious altar shrine of a Romanesque church.

The Madonna corresponds to the Sedes Sapientiae type: Mary as the throne of divine wisdom. She is seated on a magnificently carved two-tiered raised throne and enthroned in the center is the infant Jesus on her lap, facing frontally as is his mother. In the left hand it holds a book, while it has raised the right hand in the proclamation gesture. The figure is symmetrically constructed; the meticulous frontality clearly shows the early period of this impressive depiction. The faces are vividly expressively carved, with large, wide-open eyes and deeply notched upper eyelids. The stern expression is accentuated by the prominent nose, which seamlessly blends into the sharp ridges of the eyebrows. Mary’s full lips are slightly open, while those of the child are pursed. A reference to Mary’s role as mediator, communicating with people and, as a result, delivering their intercessions to Jesus?

The carefully crafted surfaces suggest the drapery folds only in shallow relief, typical of the 12th century period. Mary’s veil cloth is laid smoothly over her head, with indentations on the underside. In these places were probably appliqués – possibly precious stones. The folds are bulging around her forearms; on the upper body, rounded incised marks indicate an attempt to depict a thin robe. This falls in idiosyncratic configurations around the smooth kneecaps to hit the ground in parallel fashion. Here the textile appears thick like luxurious brocade fabric; a supposedly dense border falls between Mary’s feet as the only asymmetrical element in suggested zigzag folds. The doughy-soft folds over the rounded forms seem like the transfer of a two-dimensional painting technique to the three-dimensional carved object. Especially icon depictions of Byzantine chrysographic technique and enamel work are recalled here.

Traces of polychromy have survived in the notched grooves, indicating that the Madonna’s robe was dyed green and her cloak blue. Light red traces of color on the child’s dress refer to its red coloring, and in the tradition of Christian color symbolism this could refer to the imminent Passion of Christ. However, it could also be bolus – an alumina silicate – that serves as a substrate for later gold leaf gilding. The throne is covered with remnants of a dark, oxidized layer, indicating earlier silver plating. This is also symmetrically structured: A group of three narrow columns, each ending in arcaded arches, flanks the depiction of the Madonna in a majestic manner. These arcades each support a panel with an elliptical decorative ornament inscribed in a thick rectangular frame. The reference to contemporary luxurious furniture is also found in more of these early Madonna depictions.

For example, the so-called Madonna of Orcival, or Vierge en Majesté, is stylistically very related to the specimen presented here. Both testify to high, masterful quality, although the sculpture described is characterized by greater elegance and was constructed in a less block-like, rigid manner. The child’s bent-over posture proves this in a playful manner and also makes the depiction seem more viewer-oriented. Furthermore, it is already part of the later typical tradition of not merely gilding the bodies of the figures, as in the beginning, but also dressing them in appealingly colorful polychrome.