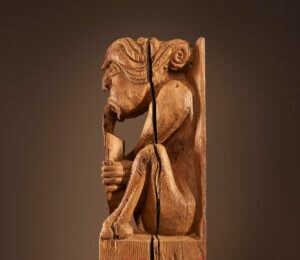 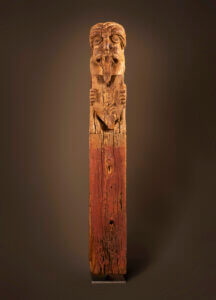 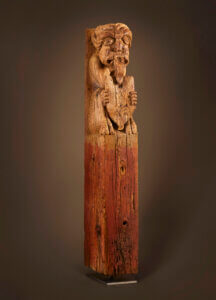 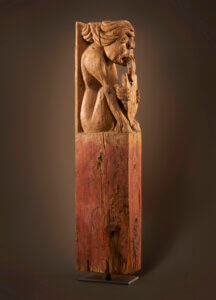 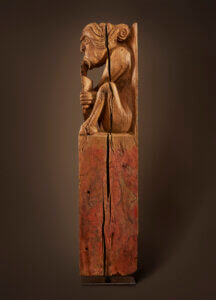 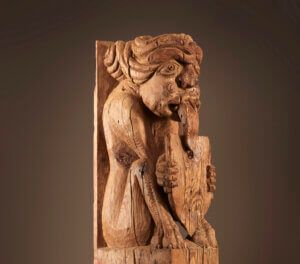 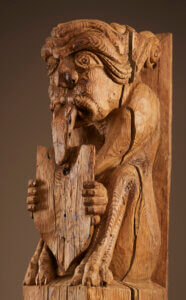 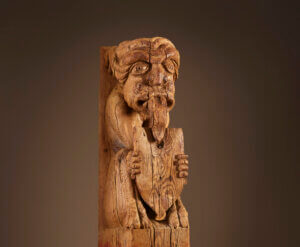 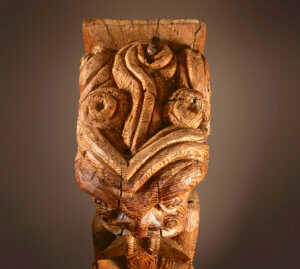 This singular figure is a demonic, devil-like figure carved from part of a long streetcar made of pine wood (length 151 cm). Presumably, this architectural sculpture represents an architectural element of a wooden ceiling, either in a castle or a town hall, can be stylistically assigned to the region of Grisons to South Tyrol and dates from the 12th/13th century. Century. Particularly noteworthy are the old frame remains of the beam.

As the epitome of evil, the devil is shown either as a single figure or within a group of demonic figures. There is no description of the devil in the Bible itself; therefore, it was up to the image carvers to invent suitable physiognomic features. Typical is the blending with characteristics of pagan, Greco-Roman gods, such as goat’s feet or paws and ram’s horns of the god Pan. Peculiarities of the Romanesque style are the drastically widened eyes as well as the deep-set eyebrows or the dense head hair, which curls up into a horn in an abstracted manner. Other physiognomic, almost animalistic details include a thick bulbous nose and an oversized mouth with pointed teeth and a long, outstretched tongue touching the crest-like shield the demon holds in its hands. The squatting devil figure, shown in strong frontality, presents the shield in front of the body, suggesting the representative function of heraldry. This is a unique representation of the synthesis of heraldic and apotropaic function.

Such fearsome figures have apotropaic, i.e. ominous, effect and therefore serve to protect the structure. This explains why houses were decorated with such motifs, for example in the form of gargoyles in cathedrals. Our sculpture now has a dual function of protection as well as bearing a family crest, presumably from the family that donated the building for which this devil figure was originally intended. The character’s facial expressions are particularly prominent, as is the stuck-out tongue. The Bible attaches great importance to the tongue as a symbol of speech because it manifests a powerful voice or a deity. In connection with Medusa, another apotropaic figure, this suggests an all-devouring hunger. In the case of the devil, the tongue sticking out can also be interpreted as a sexual innuendo. This motif has been known since the 11th century as an attribute of the devil, in connection with fear, blasphemy and sin, this in turn being associated with the demonic sphere. It probably also has a warning effect on the viewer, as it can be seen as a visual sign of speaking. Here, however, this motif is used playfully to draw the focus to the escutcheon, which was almost certainly originally painted with heraldic signs of the founder.

Comparable depictions of sinners being eaten by the devil can be found, for example, as architectural sculpture in St. Peter’s Church in Chauvigny from the 11th/12th century. Century. Here, the naked sinner sticks out his tongue and is devoured by a lion-like creature that holds the mortal pressed against him with two of its paws. This is comparable to the following Bible quotation: “Be sober and watchful! Your adversary the devil goes about like a roaring lion, seeking whom he may devour.” (1 Peter 5:8). A figure of a devil with similar physiognomic features and a protruding tongue is found on the prince’s portal in Bamberg (c. 1230). Other demon figures can be found on the tympanum of the western façade of the 12th century monastery church of Sainte-Foy in Conques. An example of a squatting figure is the pair of figures on the sides of the rose window of the Romanesque portal of the Chiesa dei Santi Giovanni e Reparata in Lucca, also from the 12th century. Another singular example of a devil with a carrying function is the demon Asmodeus, carrying a holy water font, in the church of Sainte Marie-Madeleine in Rennes-le-Château, consecrated in 1059.

This very early, highly museum-like object of the Middle Ages is an extremely rare architectural element in a magnificent state of preservation, which can be assigned to the so-called “Alpine Romanesque Road”, consisting of almost three dozen Romanesque cultural sites between today’s South Tyrol and Graubünden. Among others, similar representations of mythical animals or monsters can be found at the entrance to the castle chapel in Castle Tyrol (1125-40). This fortification, built as early as 1100, was the seat of the Counts of Tyrol. In the Knights’ Hall of the castle, which was extended by Count Meinhard II in the 13th century, there are ceiling beams with a similar setting.